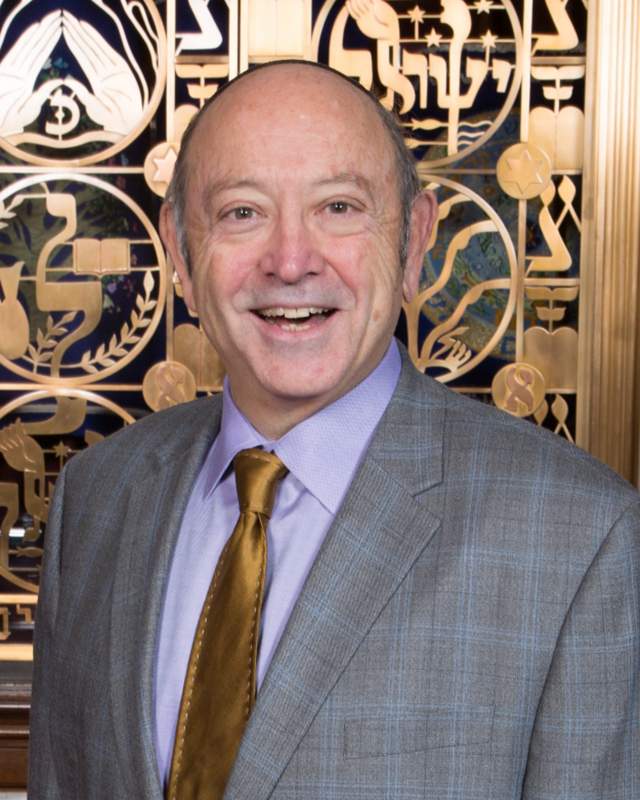 Greek-born tenor, Alberto Mizrahi, one of the world’s leading interpreters of Jewish music, is Hazzan Emeritus of the historic Anshe Emet Synagogue, Chicago. He has thrilled audiences worldwide on the pulpit, in recitals, symphony and opera performances.  His repertoire spans nine languages and a myriad of styles, making his performances unique in the field.

His debut appearance with Maestro Riccardo Muti and the Chicago Symphony Orchestra, narrating the Schoenberg “Kol Nidre,” received mention in the New York Times and has been released as a CD on the CSO label. He was a soloist in the Beethoven Society’s “Penderecki Festival,” in Warsaw, where he narrated the maestro’s 7th Symphony and sang his “Kadysz” with the Warsaw Philharmonic, as well as in Bialystok, Caracas, Graz, and on a televised performance (available on YouTube) in Warsaw, with Maestro Penderecki conducting.  He has sung in front of two U.S. Presidents; George W. Bush, at the White House Hanukkah celebration, and Barack Obama, at the U. S. Capitol for Days of Remembrance. Hazzan Mizrahi most recently performed recital programs in Copenhagen, Paris, Pisa, Saarbrucken, Strassbourg, and throughout the United States. He has also performed with major symphony orchestras throughout the United States, Europe and Israel, including the Chicago Symphony, New York Philharmonic, Atlanta, Houston, Haifa, Jerusalem, Barcelona, NDR-Hanover, and the Sinfonica Simon Bolivar. Hazzan Mizrahi is featured on the film “100 Voices: a journey home” (Cantors Assembly), the celebrated PBS concert, “CANTORS: a faith in song” (Amsterdam Portuguese Synagogue), and in Music Festivals in the U.S., Israel and Europe.

He has performed and recorded with the legendary jazz pianist, Dave Brubeck and his quartet (“Gates of Justice”), the great Theodore Bikel (“Our Song”), Howard Levy and the Trio Globo (Matza to Menorah) and understudied Luciano Pavarotti in “Ballo in Maschera” with the Miami Opera.

Hazzan Mizrahi is the former President of the Cantors Assembly, member of the Board of the Jewish Theological Seminary, United Synagogue of Conservative Judaism, Mercaz, Zamir Choral Foundation and faculty member of the H.L. Miller Cantorial School-J.T.S., New York.

Mizrahi’s extensive discography numbers over 25 CDs including six for the Milken Archive on Naxos; FESTIVAL DELIGHTS; THE HIGH HOLY DAYS (with Schola Hebraeica); BIRTHDAY OF THE WORLD I&II; BIKEL & MIZRAHI: our song; ALBERTO MIZRAHI: My Song; ALBERTO MIZRAHI AT MENUHIN HALL; and MATZAH TO MENORAH, a recording of Passover and Hanukkah songs with the TRIO GLOBO.