You are here: Home » Sermons » Rosh Hashanah, Day One 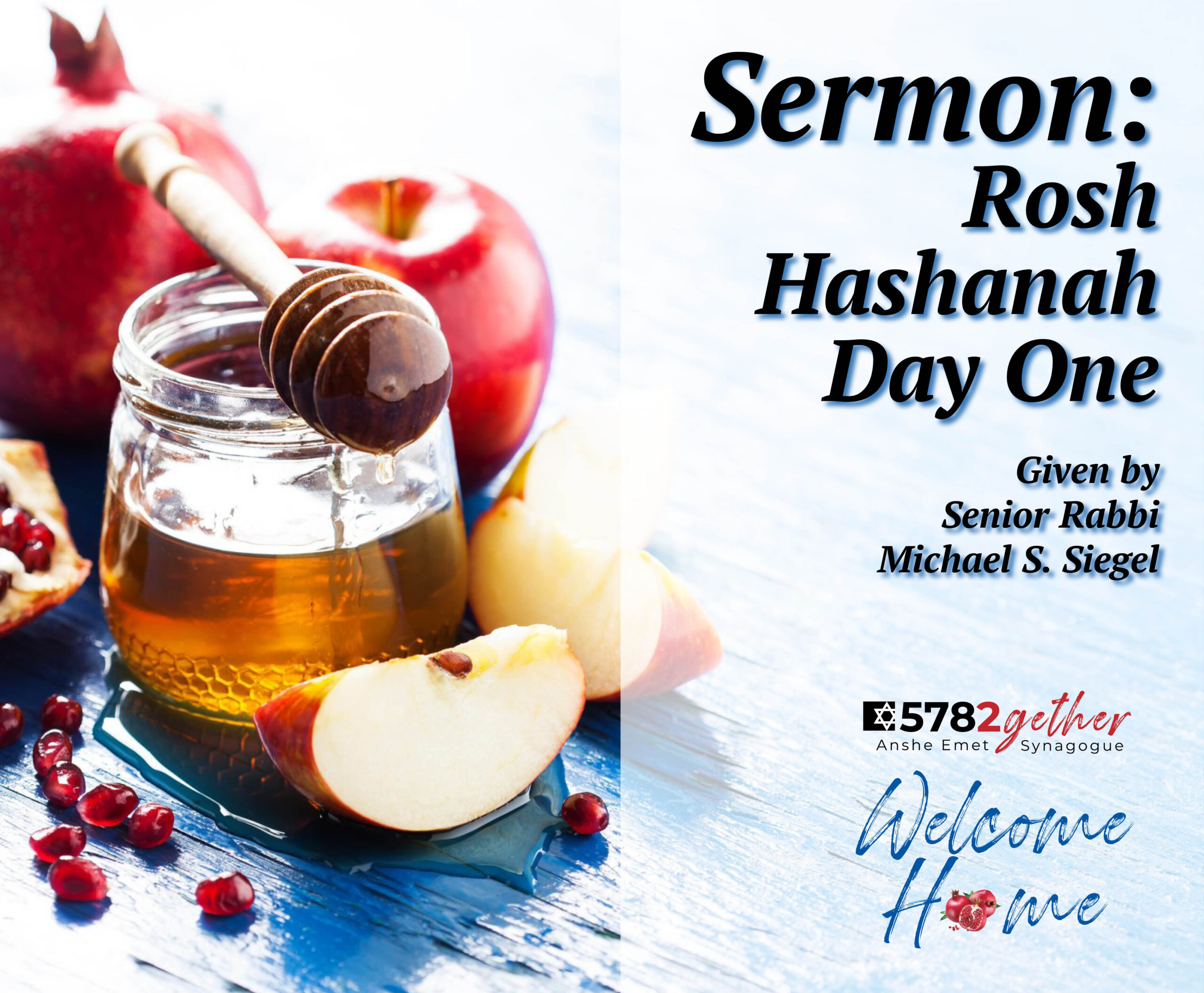 In my hand I hold a small clay bottle.  It can easily be mistaken for a random piece of pottery discovered on a dig in Israel.  But it had a very specific purpose.  This is a facsimile of an ancient tear catcher, a device to be placed under your eyes to collect tears.

In Israel, archeologists have found glass tear catchers going all the way back to the time of the Maccabees.  They were placed in the tombs of a loved one and according to folk tales of the time, the more tears gathered inside of the vessel the greater the show of love over the departed.  Romans called these bottles lachrymatory: based on the word for tear in Latin lacrima.  Tear catchers were popular as recently as the Civil War by women who hoped to offer their husbands evidence of how much they longed for their safe return.

For Jews the origin of this idea is a verse from the book of Psalms. In Psalm 56,  King David describes himself on the run from his enemies, his life is in danger.  Desperate, he looks to God to take note of him, to pay attention to his plight:

“My wanderings, You have counted; putting each of my tears into your bottle. Are they not in your account-book?”

David is praying that God will see his tears and experience his fear, answer his pleas in acts of Rachamim, of compassion, and Ahavah of love.  According to our tradition, God is the one who sees our tears and values them by collecting each one.      God is our ultimate tear catcher.  The Rabbis build on David’s words teaching that God keeps a jar next to the divine throne of all the tears that are shed.  Some say, God will use those very same tears to awake the dead in the time of the Messiah.

It will come as a surprise to none of us that tears play a role during our Yamim Noraim, our High Holidays.  Tears are intrinsic to the prayer experience of Rosh Hashanah and Yom Kippur, as it says in the Talmud: “From the day that the Temple was destroyed the gates of prayer have been closed … but even though the gates of prayer are closed, the gates of tears are not closed.”  This idea permeates the liturgy and helps to form the basis of calling the final service of Yom Kippur: Neilah.  The closing of the Shaarei Dimah: the gates of tears. Tears also flow throughout the Torah and Haftarah readings of Rosh Hashanah.

In each story, God sees the tears that are shed, collects them, and responds.

This morning I want to speak with you about the great importance of becoming tear catchers, of seeing and holding on to each other’s tears, of allowing ourselves to share that godlike ability to feel the pain of another as an expression of our compassion and our very humanity.

This morning I want to speak with you about our obligation to respond to the tears of others, to their pain, to their pleas. That responsibility to take action is a large part of what makes us Jews.

Anthropologists note that human beings are the only animals who cry out of emotion.  They argue that crying is an expression that signals appeasement and supplication in adults – something that would have been advantageous in early human communities as a means of promoting social connectedness and mutual trust.  In other words, our ability to shed tears, and for others to see them, to catch them, to share an emotion, a moment of empathy is the highest form of human communication and was intrinsic to building our earliest civilization.

To communicate through the language of tears, is a uniquely human trait, and something Jews believe that we share with God.  But unlike God, human beings also have the capacity to ignore the tears of others, to be indifferent to them, even to mock them.  Almost everyone has heard the taunt of “crybaby” on a schoolyard playground. But more subtly, human beings have the unnerving capacity to disregard the tears of those in need of our attention, our help,  because we might not want to expend the effort.  Perhaps it is because we don’t really care about them, or maybe they hold views with which you disagree, or they are perceived as a threat.

Since last Rosh Hashanah, unfortunately, we have witnessed a number of instances in which tears have been willfully ignored.

I ask you, in the recent scenes from Afghanistan, or the devastation in Haiti, or the Hurricane damage this past week, are we seeing the tears are we catching them, or do distance and fatigue mute our response? What about the scenes of gun violence in our own city? How many miles does it take, exactly, to permit us to feel removed?

There is a crisis of empathy in this country, an unwillingness to respond and in too many cases people blinding themselves to the tears of those around us.

A recent study from the University of Michigan found a 40 percent decline in empathic behavior among college students over a span of 30 years, with most of the decline taking place after 2000. The researchers tied the decline to the presence of mobile technology. What makes this study that much more concerning is that its results were published in 2010, before the explosion of social media. This period of Covid has only exacerbated the situation with the use of masks, and the increase in our dependence on technology, on screens.  This was brought home to me the other night when on the news I saw video of two men begin brutally beaten, robbed, stripped of their shoes in Streeterville, not all that far from us.  There was a crowd on the street watching, many were recording the event on their cell phones and not one person trying to protect the victims.  As we look away from one another, or see people through our screens, too many tears are falling, unnoticed, uncaught, in ways that calls our humanity into question.

Let us not conclude from all this that there are no tear catchers amongst us.  But it is a skill that must be taught, modeled, and developed. We are born with a capacity to see the tears of others, to be tear catchers, but it is something we need to develop, to work at.  Empathy is an emotional muscle which will atrophy if we don’t use it.

It is vital that we teach our children and remind ourselves that in our tradition we are not asked to care for one another — we are commanded to do so.

This extends to those we recognize the least, the strangers amongst us.  It is our responsibility to teach them that our Torah does something unprecedented in the annals of human history.  It commands that we empathize through national memory. Over and over the Torah states that the reason that we should care for the stranger is:

In other words, a Jew is commanded to recognize the tears of the stranger, for to do otherwise is to forget part of our national story, to allow them to fall to ground uncaught is an affront to God.

In this topsy Turvey year when there is so much to be concerned about, I have another story to tell.  A story of people in our community who learned the lesson of our tradition and acted.  Our Bnai Mitzvah saw the tears of others and responded in remarkable ways.

One Bar Mitzvah donated iPads to a senior citizen home and gave an online presentation as to how to use them so that they could zoom with their families.  He recognized the tears of loneliness and responded.

Two sisters put on an on line concert for another group of seniors playing instruments and singing because they recognized the tears of isolation, and they acted

Other Bnai Mitzvah packed hundreds of meals in their homes to be given out to at risk youth through the Night Ministry because they recognized the tears of hunger and fear, and they acted.

Some collected coats so other kids their age would be warm when they went outside.  They recognized the tears of poverty, and they acted.

In every case, our young people grappled with the limitations of Covid. They listened. They thought deeply about how and why those tears were flowing and what they could do to help.

They found a way to catch the tears of others, to feel their pain, and to offer the kind of support that could only come from someone who has made a heartfelt attempt to understand.

I have seen the tear catchers in every level of our congregation. On our caring committee who have made hundreds of calls just to check in on others, delivered numbers of meals, and kept connection with those at risk.

I have seen the tear catchers amongst those who have given generously so that we can help those in our community who are facing economic hardship.

I have seen the tear catchers amongst the medical professionals in our community who have responded selflessly to the tears of those who suffered with Covid.

I have seen older generations teach younger generations as well. In one case a person in our congregation ensured that people in our community could pay their rent, purchase food, clothe their families. What this person wanted in return was to hear the stories of the people that were helped, not their names but their circumstance, so that his grandchildren would learn their responsibility to see the tears of others and respond

There is a certain irony in that during the time when the synagogue building was largely closed, I saw the many ways that its importance as a place for the Jewish community, as a place to connect growing on every level. In so many ways our congregation truly became a tear catcher for our Kehillah and beyond. It is good to know that a synagogue remains a place where empathy can be taught, practiced, modeled, and passed to the next generation.

My friends, the word Hineni has been the watchword of Jewish presence since the time of Abraham and Sarah. When they stood before God they said: Hineni, I am here, I am fully present.  When the time comes, and it surely will, when the world reopens, when the masks come off, we will need to remind ourselves of the importance of seeing each other face to face, of being fully present with one another. Let us also acknowledge that the world has changed since Covid began and so has this congregation.  We will continue streaming our services and putting our classes, lectures, and concerts online into the future.  But let us be wise enough to remind ourselves that our new electronic normal is not completely normal.  Back in May and June, as we began to slowly reconnect, I asked people what the best part of the reopening.  For most of them, it was not going to a favorite restaurant or traveling to an exotic location.  It was physically being with a loved one, to see an unpixellated view of a face, to hear a voice, to look into someone’s eyes and catch the tears of joy when holding a loved one in your arms.  What they were describing was the power of Hineni.

I pray that when we gather next Rosh Hashanah, God willing,