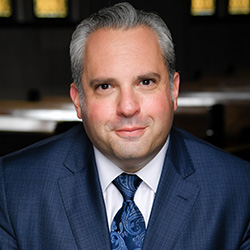 Cantor Gideon Yechiel Zelermyer is a graduate of the Tel Aviv Cantorial Institute where he studied with Naftali Herstik, Chief Cantor of the Jerusalem Great Synagogue. Gideon has performed around the world as a featured soloist. He and the Shaar Hashomayim Synagogue Choir have toured North America and the United Kingdom and their series of recordings, “The Music of Congregation Shaar Hashomayim” has received widespread critical acclaim. Gideon has performed with Kent Nagano and the Montreal Symphony Orchestra, Boris Brott and the Orchestre classique de Montréal, and is frequently heard singing national anthems at Centre Bell and at Fenway Park in Boston. He is the featured soloist on Leonard Cohen’s Grammy Award winning song “You Want It Darker.”