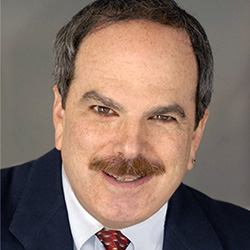 Roger Pines is recognized nationally and internationally as an expert in the field of opera, encompassing writing, lecturing, broadcasting, adjudicating, and repertoire research/consultation. His voice is familiar to a large radio audience from appearances on the Metropolitan Opera broadcasts’ “Opera Quiz,” for which he has been a panelist since the 2005-06 season.

Roger recently concluded his 26-year-tenure at Lyric Opera of Chicago.  In addition to serving as dramaturg and editing the company’s house program – for which he also wrote a large number of feature articles each season – he was co-host and co-producer of the company’s live broadcasts (2010-18); a presenter of lectures and moderator of artist panels, both in the opera house and throughout the greater Chicago area; and special lecturer and consultant for the Ryan Opera Center, the company’s renowned young-artist program. He also co-edited the book commemorating the company’s 50th anniversary. During the years following the launching of the “Ask Roger” feature on Lyric’s website in 2016, hundreds of opera enthusiasts emailed questions to him on a wide variety of opera-related topics.

A judge for the Metropolitan Opera National Council Auditions since 1991, Roger has judged for several other prestigious competitions nationwide, among them Young Texas Artists, the scholarship competition of the University of Cincinnati College-Conservatory of Music, the concerto competition of Northwestern University, and the finals of the National Association of Teachers of Singing and Classical Singer national competitions.

A contributor of numerous articles and reviews for important American and European publications, Roger has written pieces that have appeared in Great Britain’s most distinguished newspaper – The Times (London) – as well as in Opera News, Opera, International Record Review, The Opera Quarterly, BBC Music, and programs of every leading American opera company, from Lyric, the Metropolitan Opera and San Francisco Opera to Houston Grand Opera, Washington National Opera, The Santa Fe Opera, and Cincinnati Opera. Among his recent publications are articles for the programs of The Juilliard School and Ireland’s Wexford Festival. He has written program notes for CDs on the RCA, EMI, Decca, Sony Classical, Deutsche Grammophon, Erato, Virgin Classics, and West Hill Radio Archives labels. Among the more than 25 releases have been Renée Fleming’s “Verismo” (Grammy winner); Joyce DiDonato’s “Diva/Divo” (Grammy winner); the re-releases of Beverly Sills’s complete Norma and Manon; a four-disc set of radio broadcasts by Jussi Björling; and recital discs by Anna Netrebko, Danielle de Niese, Juan Diego Flórez, Ben Heppner, Jonas Kaufmann, and Vittorio Grigolo.

Roger has lectured for such prestigious organizations as the Art Institute of Chicago and the Cleveland Orchestra. His lifelong interest in historically important singing has led to lecture residencies at the University of Texas at Austin and the American Institute of Musical Studies in Graz, Austria.  In 2018 Roger undertook a five-week seminar at Chicago’s Newberry Library, one of the most renowned independent research libraries in the world.