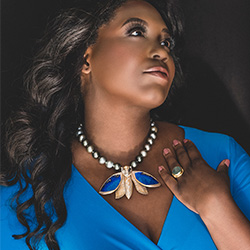 Grammy winning opera singer, Angel Blue, has emerged in recent seasons as one of the most important sopranos before the public today. She has taken the opera world by storm with historic performances as Violetta in Verdi’s La Traviata. Despite being told it would never happen, Ms. Blue was the first black woman to ever sing the fully staged role in Italy at Teatro alla Scala on March 12, 2019.

On September 23, 2019 she opened the Metropolitan Opera’s 2019/2020 season as Bess in a new production of George Gershwin’s Porgy and Bess. These performances followed her internationally praised French Opera debut and role debut as Floria Tosca at the Aix-en-Provence Festival in July of 2019.

Puccini’s La Boheme has played an especially prominent role in the development of Angel Blue’s career. She made her United States operatic debut as Musetta at the Los Angeles Opera in 2007 while a member of the company’s Young Artist Program and subsequently made her debut at the Teatro alla Scala in Milan in the same role. As Mimi, she has won special international acclaim. Ms. Blue first sang the role at the English National Opera in London in 2014 and has since sung Mimi for her debuts at the Palau de Les Arts in Valencia in 2015, at the Vienna State Opera in 2016, and with the Canadian Opera Company in 2019. Mimi was also the role of her Metropolitan Opera debut in 2017. In Germany, she has already been heard as Mimi at the Semperoper Dresden. Other recent operatic engagements have included her debuts as Liu in Turandot at the San Diego Opera in 2018, as Marguerite in Faust at the Portland Opera in 2018 and as Bess in Porgy and Bess in Seattle in the same year. She debuted in Baden Baden as Elena in Mefistofele in 2016 and sang her first Violetta in La Traviata at the Seattle Opera in 2017, a role she also sang in the 2018/19 season for her debut at the Royal Opera House, Covent Garden and her return to the Teatro alla Scala. In the 2019/2020 season, Ms. Blue made her debut at the Hamburg State Opera as Mimi. She also became the first African-American to receive the Beverly Sills Award from the Metropolitan Opera in 2020.

Angel Blue was raised in California and completed her musical studies at UCLA. She was a member of the Young Artists Program at the Los Angeles Opera, after which she moved to Europe to begin her international career at the Palau de les Arts in Valencia, Spain in 2009 and at the Verbier Festival in 2010. She subsequently appeared at the Theater an der Wien in The Rape of Lucretia (female chorus) and as Giulietta in Les Contes d’Hoffmann in a production created by Oscar-award-winning director William Friedkin.