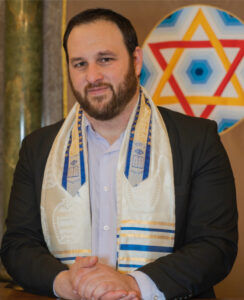 Cantor Jonathan Kohan was born in Buenos Aires, Argentina. A life-long musician, prior to his Bar Mitzvah Cantor Kohan had already become the organist for his congregation: Congregación Hebrea San Martin. At the age of 23, Cantor Kohan was hired as a professional in the same congregation and several years later became the Ritual Director and Hazzan for Congregación Sefaradí Agudat Israel, in the province of Entre Ríos.

In 2008 Cantor Kohan became the Hazzan and Rabbinical Assistant of the Asociación Israelita de Beneficencia de Rosario, in the province of Santa Fe. He is also a Judaic Studies High School Teacher in the ORT school in Rosario. Since 2020, Cantor Kohan has been the coordinator of Beit Asaf Cantorial Institute, the cantorial school of the Seminario Rabínico Latinoamericano, Cantor Kohan is a founding member of the Inter-religious Board for the Common Good of the Universidad Nacional de Rosario.

Cantor Kohan graduated from the Seminario Rabínico Latino americano with degrees in Hazzanut and Jewish Education. He is currently also a student of Rabbinical studies at the Seminario. Prior to his time at the seminary, Cantor Kohan completed a bachelor’s degree in Psychology from the Universidad de Buenos Aires with a scholarship from Yad Vashem.

A lyric tenor, Cantor Kohan also plays the guitar and piano. He is also a composer who has created various works for congregational liturgy. He has performed in various cities in Latin America, mainly in concerts of Jewish Music, both secular and religious. He has also participated in opera and chamber music recitals.

Listen to Services and Discussions with Cantor Kohan